It's taking me a few days to write these, sorry. I'm still feeling pretty tired from the trip and I've got Andrew with me this weekend, so I've had more important matters.

I woke up Tuesday to a gray, drizzly morning. Plus, It was a little chillier than expected. I met Gill up on the rooftop terrace where breakfast was served. The view was quite nice and at one angle, we would see down to the water. It was, however, too windy and chilly to linger too long. Gill suggested that we take the ferry out to a spot called Coronado Island and check out the beach. Sounded like a plan to me seeing as I had no clue as to what we would do until it was time for the gig.

First, a trip to the House of Blues to see if we could get the tickets to the show, we were a little early for that. Than a trip to the beautiful train station to print our tickets for Wednesday. The building was gorgeous - built in 1915 (I think that is what the plaque said). Glittering domes stood high guard along the main entrance. The inside was wide open, with a ceiling like the bottom of a boat. I know there is a proper name for this, I just don't know it. Spread out on the walls were brightly glazed yellow tiles that announced that the rail line was the Santa Fe.

From there, we walked to the water to catch a ferry. Our timing wasn't quite right, so that gave us time to walk down toward the Midway Museum. We didn't go on the boat, but wandered along the neighboring park. There were cool trees to climb (we both climbed them) and an enormous statue of the iconic Life magazine picture from VE Day. 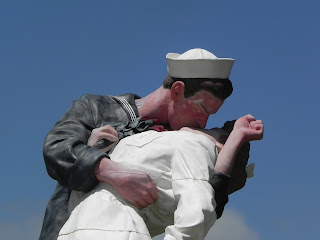 That jaunt had killed enough time to catch the ferry. By this time, any remnants of chilliness had dissipated and the sun was hot atop that boat. I hadn't packed any sunblock and by the end of the day, my face was blazing red (now, peeling). Coronado Island is inhabited by a number of large expensive homes (though, not all were) and restaurants. We split a spinach salad and sweet potato fries and then tried to make our way to the other side of the island where there is a beach. The island is only a mile long, but we never quite made it to the beach, time ran out and we had to get back to get ready for the concert.

Weeks ago, I ordered a purple bra top from Victoria's Secret, with the notion that I would wear it to this show. So I put it on and my girls were on full glorious display. I got my courage together and went out, just like that. We walked two blocks to the venue, got our tickets and went in to eat, because a stamped receipt would let us jump the queue and it was our intention to stand front and center. It worked too.

We were joined by someone who knew Gill through some other people and he (Gary) was quite helpful as we entered the venue - leading us downstairs to the main floor. Front and center indeed. This gives me one of the funniest moments in the the trip. John Bentley was on the front of the stage, chatting with someone in the audience who knew him. Someone from behind my left should started shouting "Glenn! Glenn!" I turned around and said, "That's not Glenn Tilbrook!" The couple who had been shouting asked me who it was and, as uncondescendingly as possible, I set them straight.

Time for the opening act - new buddy - Steve Poltz. It was funny, the first thing he did was say, "some people came all the way from the UK for this show," meaning Gill. That was as nice as the shout out to Detroit the night before. Then he launched into a wonderful set of songs. I don't really know the names of them, but they were sung with with great passion and wonderful humor, he immediately won me over. One thing I can said, is the crowd by the bar in the back were very rude to this hometown bar, as they talked all the way through his set.

Once Steve left, the main floor began to fill-in and even get a little odd. Before Squeeze came on, a small surge pushed on us in the front. I turned around to the person whose shoulder landed into me and said, "Really? Aren't we all a little old for this pushing crap." She said someone pushed her. I girded myself and waited for the boys.

Finally, Squeeze!!!!! The band bounded out on stage and I swear that I detected a quick smile from Mr. Tilbrook as he caught sight of two friendly faces front and center. They launched into "Take Me I'm Yours." The sound was not great and it was obvious that Glenn was not quite pleased as he looked to the sound board often, giving directions. His vocals were a bit washed out and we could not hear Stephen at all. Aside from that, the band was remarkably energetic considering how jet lagged they were. The rest of the set follows:

As a hardcore fan, I loved the mix of deeper cuts and hits - love, love, love "In Quintessence." The crowd was a bit more muted through that section of the show, but polite. The big surprise for everyone was when Glenn didn't pick up his guitar for Tempted and led the crowd on a backing vocals sing-a-long with nothing but the mic in his hand. Stephen said later that the move was a surprise to everyone.

After the show, Steve Poltz's sound man Chris kindly led us to the after show. We thought we were on the list, but the venue couldn't find the list,so we initially figured we were out of luck. There we chatted with all the guys, except Chris, and got to meet Rissa who will also be in the Baltimore show (with me!!!!) at the end of April. I had my obligatory picture taken with Glenn. I must say, the beard is better in real life than in pictures. I suggested that it might be nice braided; he just guffawed and gave me a bit of a look.

My favorite part of the after show was that Glenn remembered me. I introduced myself and he looked incredulously at me and said "I remember you." He promptly asked me how my school year was going. More chit chat and time to leave.

Tomorrow - The Coach House.
Posted by Teacher Toni at 7:51 AM